This past Wednesday was Rowan’s Law Day - a day aiming to raise awareness about concussions. ⁠

Odds are you know someone who's had a concussion, or you've had one yourself! Concussions can occur in sport settings, at home, work, and other environments too.

Rowan's Law includes important information that is good to know and recognize as a community member. Unfortunately, this law came about after a tragic incident. In 2013, a high school rugby player’s concussions went unreported while she continued to play. Later, she suffered from Second Impact Syndrome— catastrophic swelling caused by a second injury to a brain still healing from previous trauma. She sadly collapsed on the field and died four days later. ⁠ 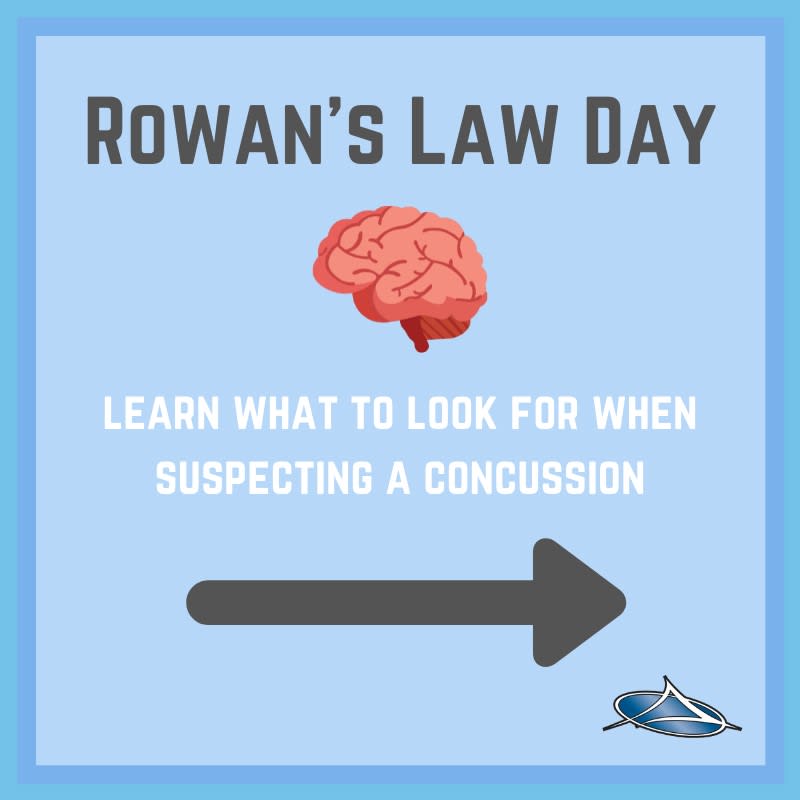 ⁠
Learn the symptoms of concussions from the Ontario Government website → ⁠

The following information is directly from the Ontario webpage for Rowan's Law.

"Symptoms may appear hours or days after an injury, especially in children and the elderly. If symptoms appear or persist, visit a physician or nurse practitioner"

Red Flags to treat as an emergency and/or call 911:

- Neck pain or tenderness
- Double vision
- Weakness or tingling in arms or legs
- Severe or increasing headache
- Seizure or convulsion
- Loss of consciousness (knocked out)
- Vomiting more than once
- Increasingly restless, agitated, or aggressive
-Getting more and more confused

👊 A concussion = HIT to the head, neck or body that can make you feel different.⁠
🛑 If you think you have a concussion, STOP what you are doing and TELL an adult you trust how you are feeling.⁠
🪑 SIT out of sports and activities where you could get another concussion. This is followed by a slow return to activities. There are return-to-activity protocols suggested to minimize further injury. You can follow these with the assistance of a medical doctor and healthcare team (people like us at Dynamic Health and Performance)!⁠

What to do when you have recently sprained your ankle!

The importance of hydration and tips for drinking more water.

Ready to Get Started?

Whether you're looking for more personal agility or to help your sports team perform better, we invite you to get in touch. No pressure. No obligation. Just a conversation about what we can do together.

Teams We Work With